HOW TO LOOK THE PART 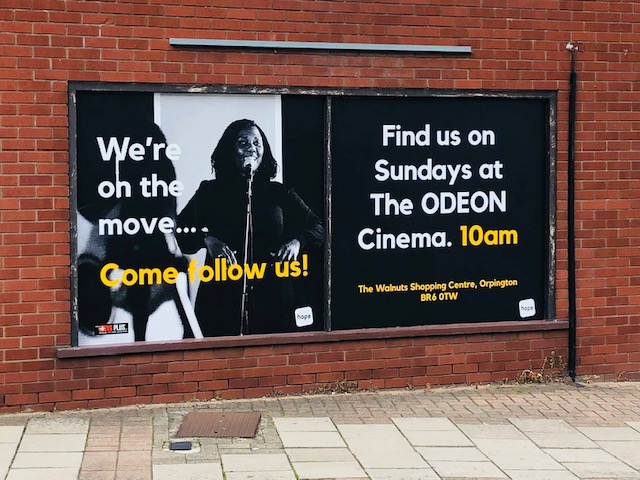 Today’s post is a bit more personal. Well, all other blogposts are just as personal but this one peels back the layers just a little bit more; so you can walk the gratitude lane with me. The date is 8 July 2021, and the time is 16:38 pm. A picture and a message with 2 smiling sunglasses emoji drops into my phone, it reads “the posters are going up – Emi – you will be famous very shortly”. I see the message before I see the picture referred to. My heart skips a beat. Although I knew about my picture being used in a series of posters announcing that our church had moved address -my permission sought and obtained beforehand – however I was still nervous about what the final poster would look like.

I watch the video clip sent with the different posters included in the line-up and I was stunned at my image. Coincidentally, I was on my way back from work shortly after I received the messages. As my bus went past the church building, I saw a larger-than-life version of me on the window. To say I was speechless was an understatement! A gamut of emotions went through my mind. I wasn’t expecting that particular picture!

I remembered the day I was recorded as part of the worship band for a later online broadcast. I attended the recording session all dressed in black. The dress was comfortable, and I liked it and didn’t give much thought to anything else. When I arrived on set, I realised the background was black and soon enough the guys behind the camera mentioned that I had blended too much into the background. My face and my hands were the only give away signs that I was standing there if I wasn’t actively singing.

So, the guys readjusted the background a little so that I had some light-coloured structure behind me for contrast. I felt miserable and I mentally berated myself for not taking the stage set up into account. I tried to shrug off the feelings as I threw myself into the praise and worship session. Inwardly, I vowed never to wear that dress for the filming of any worship sets!  So, I was rather stunned to see the picture I thought would never meet the cut, turn out to be the one fully blown up on the church window!

Why am I telling you all this? Well, it’s because it’s been quite a journey from thinking I needed to look the part to being – as a dear aunty put it when she saw the poster- you have become a poster girl for the church! I laughed when I heard that – poster girl?! Hardly! I fully recall believing I needed to look “the part”. I was waiting to look the part before I stepped out on what I had been feeling stirred by God to do. I wanted to work on myself first and look the part before I obeyed what God told me to do.

Do I think I look the part now? Honestly, I don’t know! But then, where is it written in the Bible that you need to look a certain way before you step into your calling or fulfil the purpose for which God has created you?

Who set the parameters for this so-called part that I’m supposed to look like anyway? Magazines, social media, society, my internal chatter?

Don’t wait to look the part

Don’t wait for your bank balance to look the part

Don’t wait to feel the part

Don’t wait to appear ready before you go

Since stepping out to write, to be a published author and to speak and so on and so forth, I am yet to feel I look or sound “the part” of what I think someone successfully doing all these should look or sound like. But in every way, God has exceeded my expectations in how He uses my feeble attempts and how He makes more of what I started off with. If I were to write a letter to my younger self, I would say- quit being anxious! It’s not about looking the part. Whether you bring 1% or 88%, God will bring his 100% every time!

There are days I wonder; wouldn’t it be lovely to look and feel every inch a successful speaker or writer before stepping out to do either of those things. If I waited until I felt 100% confident, I would still be waiting and in no way would my picture be on a building on a UK high street! If, I waited until I had everything a successful woman, wife, mother, employee, employer, entrepreneur, the list is endless has – I would not have walked in purpose for the last seven years.

God knows you don’t need to feel or look the part before you step out and obey what He has for you. That’s precisely what started off the conversation between the Angel and Gideon. Judges 6:11- 7 :1-15

Gideon is like, I don’t feel the part, I don’t look the part, I hear what you’re calling me but I’m not the guy you need. God knows when our confidence needs a boost; when we need to hear what would help us view ourselves the correct way.

Maybe that’s why you’re reading this blog post now. God can use anyone, literally anything to speak to you. Recently for me it was a book I stumbled on via Audible by Anya Hindmarch titled If in Doubt Wash Your Hair. Narrated by author herself, she shares her struggles and the way she manages the stresses in life. It’s quite insightful considering Anya owns an award-winning global brand! The book is certainly not a religious book. However, God used that book to exemplify some things He had been trying to tell me. He can use anything to make you view yourself correctly, remember?

Gideon overhead the enemies’ conversations about him and his confidence went through the roof! It no longer mattered he didn’t look the part; his family was still the least in Israel and he was still the least in his family. But God saw him as a mighty warrior and that was the part that Gideon needed to see and believe for himself; for the deliverance of his people were waiting on that realisation.

In many ways, I do have a lot to learn from Gideon. Many times, I find myself, metaphorically speaking, threshing wheat in a winepress and not running on the Word I have received!  But what God has done for this girl, in spite her hang-ups, He can do for anyone!  Now when I think of that image on our former church building, I smile, because the same things that I felt disqualified me; my outfit, its colour, my posture, none of those things prevented that picture making the final cut.

So, the deal is, don’t wait until you look the part, there are mighty things waiting on you stepping out on your dreams.

As a dear sister said to me when she saw my picture on the church wall “on the wall today, on the side of a bus and on TVs tomorrow….”. In response, I laughed and said “why not” …… I am no longer waiting to look the part before believing amazing things will happen.

And you shouldn’t either!

Thanks for reading. God bless.