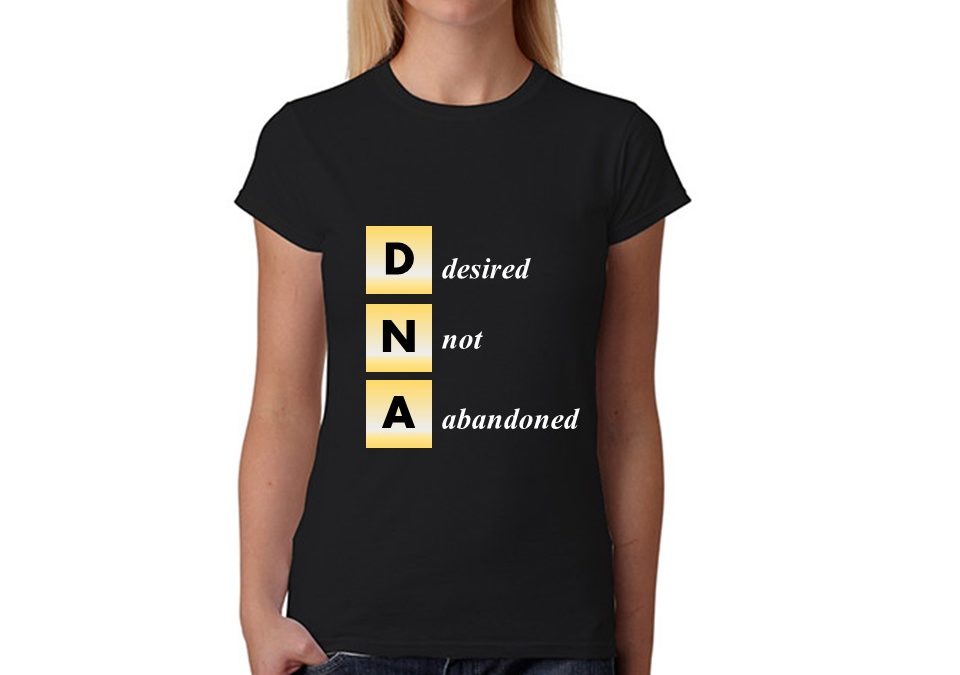 I’m sure that you have noticed that it’s been rather quiet here. Well, let’s say I’m hoping you noticed! ? Mostly it’s been for a number of good reasons. One of which is, I had been busy alongside a host of other amazing women, preparing for the recently concluded Empowering Mothers Conference 2019. More about that another time. It was truly a wonderful time in God’s presence.

The other major reason, is one which I am super excited about!! This is a dream definitely come true. I am talking about the launch of the Limited-Edition “DNA T-shirt” by The Wellspring Place.

The DNA T-shirt is a beautifully crafted T-Shirt which serves as a powerful reminder of who we are and whose we are. It is also doubles as a conversation starter for your faith. As with most things, there is backstory. DNA is short for deoxyribonucleic acid ( I dare you to pronounce that word the first-time round without messing it up ?. If you are a biology geek, you are excluded, after all this has to be a level playing field!)

Thank goodness, for the rest of us, there is an easy abbreviation. According to the Collins Dictionary, “DNA is an acid in the chromosomes in the centre of the cells of living things. DNA determines the particular structure and functions of every cell and is responsible for characteristics being passed on from parents to their children. DNA is an abbreviation for ‘deoxyribonucleic acid’.”

Yet, desired -not -abandoned is more than just a play on the abbreviation DNA. Lest you think that you have stumbled on a student’s term paper page, let me dive into the backstory. It happened while I was in church service one Sunday morning. I heard the song “Who You Say I Am” by Hillsong Worship sung by the worship band. As we sang the lines on the overhead projector, the words seemed to jump off the screen each packed with layers of truth.  Lyrics such as

As we sang the words of this glorious song (Hillsong, if you ever get to read this, Thank you!!)  I was overcome by a deep sense that if I am a child of God, who He says I am trumps anything else. What He says about me trumps what I believe or feel about myself. Still in worship, as I rejoiced in what my Maker did for me when He set me free, I heard the following whisper clearly in my spirit- “DNA Desired Not Abandoned”

I paused, and repeated the words to myself. I had never heard of that abbreviation used in such a way. Over the following few months, the Holy Spirit began to explain to me that just as each living organism has its own genetic code which links it back to its parent, it is the Father’s will for us to know that in the same way He is the One who created us.

When He breathed into man and man became a living soul, we took on God’s DNA. Sin came through the devil and corrupted the first man and woman, Adam and Eve. Sin like a virus came in and spoilt that gene pool. Man was condemned to a spiritual death and subsequently physical death. Praise be to God, who did not leave us alone, even when we turned our backs on him. Through the death of Jesus on the cross and the shedding of His blood, man was set free.

Who the Son sets free, Oh is free indeed.

God’s plan from the foundation of the world was to reconcile us back to himself. Time and time again in the Scriptures, He assures His people that He will not abandon them. From Genesis to Deuteronomy, from Isaiah to Hebrews He says I will never leave you never will I forsake you. In Deuteronomy 31:6 NLT “So be strong and courageous! Do not be afraid and do not panic before them. For the LORD your God will personally go ahead of you. He will neither fail you nor abandon you.” The Message Bible puts it this way “Be strong. Take courage. Don’t be intimidated. Don’t give them a second thought because God, your God, is striding ahead of you. He’s right there with you. He won’t let you down; he won’t leave you.”

So, don’t be intimidated by whatever your health, finances, friends, family or work mates tell you – you are desired by God and you are not abandoned. Our Heavenly Father has a myriad of ways in which to communicate His love and care to his children. And I believe on that morning He chose to use the DNA phrase to help me experience that truth.

Who hasn’t felt the pain of rejection, of being overlooked and passed by? When we experience this at the at hands of those who ought to care for us the most, it’s doubly wounding. There may be someone reading this and the things that have happened to you may have caused people to call you anything but desired. You might have read the words desired- not abandoned and think to yourself – Yeah right, desired indeed! If we are not fighting negative self- talk, we are battling other demeaning voices.

I have to confess; it is an ongoing process for me too. Today, a friend gave me a much needed talking to when she asked me a question. I had put up an Instagram post about the DNA T- shirt and I promised to post a backstory blog. It was all written down and almost typed up by last week Wednesday. Last night, I took a look at what I had written and wondered why bother.

It felt amateurish and pointless and I questioned my reasoning in promising to put up a blog post at all. Today, after Sunday service, I ran into the friend who said to me, I still haven’t heard the story! Oh yes, I said, and then gave a paltry excuse about how I should have posted it but I hadn’t yet.

You see, I had listened to the enemy’s voice telling me that what I had written didn’t matter, who cared anyway, what difference did it make. I doubted its worth and what God had placed in my hands. When you consider something as without value, you don’t expect it desired by anyone let alone God. That, however my friends, is the lie Satan wants us to swallow. If God says it, then I am who He says I am. Not my feelings of insufficiency or inadequacy. I said to my friend, I will put up the blogpost, so here it is. Thank you, Belinda!

So, let the DNA T-shirt be a powerful reminder of the fact that you are who the Father says you are, not your past or perhaps current painful present. Not even the fear of the future has a stronger claim over you than the Father’s voice. Creating this T- Shirt was such a thrill! Helping to bring the vision to life is the wonderful P31, a scriptural clothing company. Currently available in different colours. Check it out here

I hope this piece serves to encourage and to remind you of your value and most importantly your value in God’s eyes.