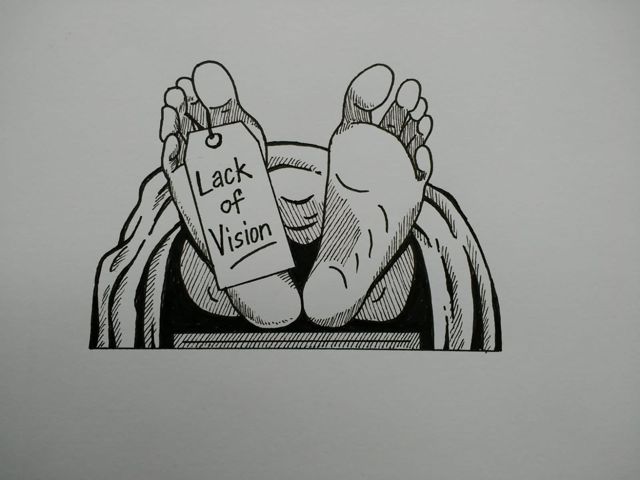 One evening, as part of a personal development program, I was reading the following words from the Bible “Where there is no vision, the people perish….” Prov 21: 18. The verse seemed to jump off the page and illuminated my spirit. I could not get beyond that verse. As I read the scripture over and over, I felt the Holy Sprit give me a picture of a pair of feet with a tag on one foot. The tag had cause of death written on it. I sensed the Lord telling me that some of His people were afraid of all kinds of things that can cause death, which they ought not to fear. However, there is another cause of death – Lack of vision! This cause of death could be very much at work in a person’s life though he or she is still alive! As much as the Lord does not want His people to live in fear of any cause of death, He also wants them to be mindful that a lack of vision can cause death.

Now, I am not an artist, so I spoke with a spirit-filled gentleman, who is gifted prophetically in my home church to help bring the picture the Lord showed me to life. This wonderful man asked me a few questions to help me understand the essence of what God showed me. Why a pair of feet? What could they represent? Why is He showing me this and not something else?

The wisdom of that exchange showed me what I needed to ask God; to help understand more of what He was saying via the picture and scripture, seeking the Holy Spirit’s help so that the picture received, is not just of confirmation of what is needed but of direction as well ie what next!

Therefore, I took those questions back to God and here are some of the answers He gave me. So, thank you Ron!

In Luke 10:38 – 40 the Bible records Jesus visiting the house of Martha and her sister Mary. Martha was busy bustling around, preparing things for Jesus and His disciples. I mean what kind of house cleaning and meal preparation do you carry out when you are hosting Jesus but I digress. Mary? She was intently sitting at Jesus’ feet, listening to His words. As I studied, the Lord showed me 5 things which take place at His feet and why that knowledge is important for our “feet”- how we move.

1. Listening happens at His feet.

Mary sat, drinking in everything Jesus was saying in spite of her sister’s to do lists! When Martha came over to complain to Jesus, presumably she had given up trying to catch Mary’s eye or whisper her name through clenched teeth. Lord, don’t you care that Mary is shirking her duties and ignoring her responsibilities! Tell her to get up and help out!

Jesus gently chides her in response, “Martha Martha you are worried and bothered about so many things; (sound familiar anyone?) but only one thing is necessary, for Mary has chosen the good part which shall not be taken away from her.” Listening at His feet, the one necessary thing, the chosen good part, as Jesus calls it – means we need to actively seek Him out to hear Him. We need to prioritize this good part over other seemingly important parts.

Ps 119:105 says that your word is a lamp to my feet and a light to my path. Our feet need illumination so that we do not wander into the way that leads to death. God’s Word is the needed lamp and light. Our feet should move in response to what He says. When Jesus was tempted by Satan to turn stone into bread following his fast of 40 days and nights, Jesus responds “man shall not live by bread alone but on every word that proceeds out of the mouth of God.” Matt 4:4 If His word is what we are to live on and that word is a lamp to our feet and a light to our path, then surely the absence of that word can lead to death. Listening for the sustaining word happens when we intentionally position ourselves at His feet. In our case when we spend time in the Word of God.

2. Worship occurs at His feet.

Luke 7:37-38 reads “And there was a woman in the city who was a sinner; and when she learned that He was reclining at the table in the Pharisee’s house, she brought an alabaster vial of perfume, and standing behind Him at His feet, weeping, she began to wet His feet with her tears, and she wiped them with the hair of her head, and began kissing His feet and anointing them with the perfume.” Adoration, sacrifice, worship all taking place at the feet of Jesus.

When the Pharisee who invited Jesus saw this display, he fumed to himself – if this Jesus was really a prophet, he would know what sort of person this woman was, that this woman touching him was a sinner. But Jesus knowing this man’s thoughts gave the Pharisee a short lesson on what he was really missing. This woman wet, wiped, and anointed Jesus’s feet. She worshipped him despite her sinful state and society’s opinions. From that position of worship at His feet, she is raised into the newness of a forgiven life and wholeness.

3 Vulnerability takes place at His feet.

“When Mary reached the place where Jesus was and saw him she fell at his feet – Lord if you had been here, my brother would not have died” John 11:32.  Mary overcome by the grief of her brother’s death and the physical absence of Jesus at the most crucial time in their lives; falls at the feet of Jesus. She does not attempt to hide the agony she felt from Jesus.

The woman who washed the feet of Jesus with her tears was a sinner, she did not cover up her sins but came as she was and obtained mercy.

The one place we can be certain our weakness will not be ignored or weaponized is with Jesus. As we pour our hearts to Him in prayer and come despite our hurts – He will not leave us unheard and untouched.

4. Healing takes place at His feet.

“And large crowds came to Him bringing with them those who were limping, had impaired limbs, were blind, or were unable to speak, and many others, and they laid them down at His feet; and He healed them. Matt 15:30

Reading this verse, you may find yourself thinking at this point about people and situations you have laid at his feet and the outcome was not what you wanted or prayed for. Does Jesus still heal today? Definitely? Does He still answer prayer? Without a doubt! Pun intended! Often, the Lord permits in His wisdom what He has the power to prevent. However, He chooses to heal and whatever He permits in His love and wisdom, the best place to find lasting healing is down at His feet.

5. Gratitude takes place at His feet.

While He was on the way to Jerusalem, He was passing between Samaria and Galilee. And as He entered a village, ten men with leprosy who stood at a distance met Him; and they raised their voices, saying, “Jesus, Master, have mercy on us!” When He saw them, He said to them, “Go and show yourselves to the priests.” And as they were going, they were cleansed. Now one of them, when he saw that he had been healed, turned back, glorifying God with a loud voice, and he fell on his face at His feet, giving thanks to Him. Luke 17: 11-16

One leper out of ten returned to give thanks after discovering that he was healed. He threw himself at Jesus’s feet and thanked him. As he expresses his gratitude, Jesus, amazed, commends his actions and the ex- leper is raised up to wholeness. “And He said to him, “Stand up and go; your faith has made you well.” Luke 17: 19

Many different people fell down for different reasons at Jesus’ feet. Whether it was in submission or sorrow, in prayer or praise, service or sacrifice, all were welcomed by Jesus. Which then leads us back to our starting picture; the importance of receiving at His feet so that we can fully live the life He died for us to live.

God’s word gives light to our feet so that we can walk in the way of the Lord. We need to live positioned to listen to him, to worship him, to show our vulnerability in order to receive healing for all our wounds. The Bible says how beautiful are the feet of those who share the gospel. We show our gratitude for all that He has done in us by sharing the Good News of all He has done for us. The vision and clarity we need to fully live, positioned for influence and His glory, are found at His feet.

May the Lord bless you and increase your vision.

*All scriptures are taken from NASB